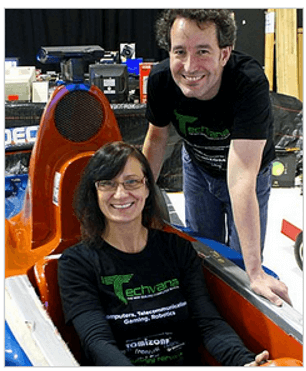 Mark and Katie Barlow have exactly one month to bring their dream of a computing museum to life.
Techvana – The New Zealand Computing Museum will be home to Mark’s lifetime collection of old computers and gadgets, with a whole section dedicated to retro gaming gizmos.
A charitable trust will run the venture, which will include a cafe, functions space and meeting rooms.
Entry for the public will be via gold coin donation.
But $250,000 is needed to secure the project’s future, the Barlows said.
Mark began collecting computers as a teenager and was making software and a living in the IT industry, before he even left high school.
Almost $20,000 has been pledged online so far.
The Barlows have been shifting the more than 1000-piece collection from their home to the Cook St site over the past three weeks.
There have also been donations to the collection from computing enthusiasts around New Zealand, Katie said.
“We’ve been given this place.
“I must say from my opinion it’s been a blessing and a curse, because we’ve had three weeks of absolute madness while we’ve tried to move ourselves in here,” she said.
“But the fortunate thing for us is we’re surrounded by passionate people, who are geniuses as well.”
The St Johns’ couple has taken to crowdfunding website, PledgeMe, to raise the equity.
Techvana is set up in the old Oktobor Animation studios at 105 Cook St in the central city.
The Barlows are there on a gifted lease until December 5, by which time a decision on Techvana’s future will be made.
If the money is not found there is a plan B of sponsorships and partnerships, Katie said.
The museum is open to the public between noon and 5pm on weekends.
Go to techvana.org.nz for more information.