A look back at NZ’s Digital Nationz Expo…

Gaming expos are held all around the world, but none ever visit New Zealand, with the closest thing to a gaming expo Kiwi gamers usually receive is the Armageddon Expo.

Yet the Australians now have two expos, with PAX Australia and the EB Games Expo being held both this year.

Thanks to Digital Nationz, a dedicated gaming and technology expo has now come to New Zealand.

It was a smart decision to make its debut in 2013 with the big draw card being that the Xbox One and PlayStation 4 consoles were playable in the country for the very first time. It’s like having our very own E3-like expo.

An event like this is either going to be a huge success or a huge failure.

Judging by the amount of people that went to the event and the positive response, I feel that Digital Nationz was a good success. Although the Xbox One and PlayStation 4 were the main attractions, the video game museum was the highlight for many attendees (including myself).

First off, let’s talk about the Sony PlayStation 4. I already had a chance to play the console a few days prior to Digital Nationz, but the games seemed better to play the second time around.

Driveclub was difficult to play when I first played it, but the second time playing I got used to the controls and physics.

The game is not a simulated racing title so fans of Gran Turismo and Forza may need to give some time adjusting to the physics of Driveclub. Nevertheless, the game is looking gorgeous as the PS4’s power can render background environments in finer detail.

The only other big PS4 title Sony had to showcase was Knack. Knack is a platform game much like the old Crash Bandicoot games. It was okay, but there’s nothing too innovative about the title judging by the demo I played.

As for Gran Turismo 6, the game’s graphics are very impressive. The only downside is that I suck at driving and cannot comment much more about the game’s physics.

On the other side of the room, Microsoft arguably had the better (and bigger) stall at Digital Nationz. It’s very hard to miss the huge 400 inch screen they set up where you could play the Xbox One’s Killer Instinct.

The game itself plays a bit like Street Fighter IV. I did not know much about the game’s controls, but I still managed to beat a lot of people on it. The other digital Xbox One game I played was Crimson Dragon. This is a great game if you played Panzer Dragoon for the Sega Saturn back in the ‘90s.

The two other big Xbox One titles I got to play were Ryse: Son of Rome and Forza Motorsport 5. I actually had a chance to play a co-op session with Crytek producer Mike Read on Ryse. The game looks pretty awesome with brutal and bloody animations to boot. The controls for the game are smooth as well.

Forza Motorsport 5 looks realistic as ever, although the demo was way too short to leave a lasting impression. Gameplay wise, the game has the same simulated feel as any of its predecessors.

In terms of third party publishers, Ubisoft had a huge presence bringing in playable builds of Assassin’s Creed IV: Black Flag on the PS4. There were also playable versions of The Crew and Batman: Arkham Origins just around the corner too.

Sadly, Watch Dogs was only on display as a 15 minute video presentation and wasn’t playable to anyone. Other games that were playable included the fun LEGO Marvel Super Heroes and Disney Infinity.

The oddest publisher at Digital Nationz was EA, only displaying playable versions of FIFA 14 on the Xbox 360. They did not showcase Battlefield 4, Titanfall or any other game due out on the Xbox One and PS4.

Maybe if Digital Nationz returns next year, EA will be prepared to showcase more than just one game… 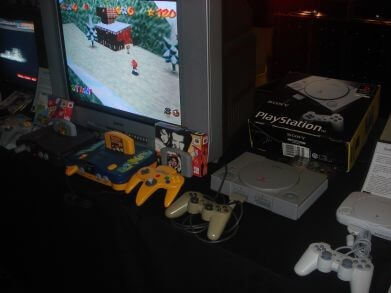 My favourite part of the entire event is without a doubt the history of video gaming museum. Thanks to two avid collectors, they brought over pretty much every video game console ever made since 1972.

This included handhelds, computers and of course consoles from Nintendo, Sony, Sega and Microsoft. They even brought over some games for us to play on and even the original boxes the consoles came in.

A part of my childhood returned when I saw the Amiga, PSOne, N64 and PS2 all on display. I even got a chance to play on even older consoles such as the Vectrex, Super Nintendo and the Atari 2600.

Overall, Digital Nationz was a fun event for any video game and technology enthusiast.

If the organisers manage to host another event next year, I’m sure it will be bigger and better than ever.

Given the weekend, Digital Nationz has the potential to become a huge annual event.