ET are you out there?

The Atari E.T. Landfill Excavation Starts Today. What Will They Find?

In 1983, the failing Atari video game company allegedly dumped millions of unsold E.T. the Extra Terrestrial cartridges in a New Mexico landfill. Ever since, game nostalgists have tried to track them down. Today, screenwriter Zak Penn’s documentary crew begin digging, and our friends at Wired got a sneak peek at the excavation.

Source:  http://gizmodo.com/the-atari-e-t-landfill-excavation-starts-today-what-w-1568029345/+robertsorokanich ET are you out there 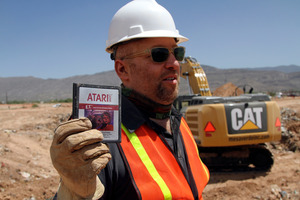